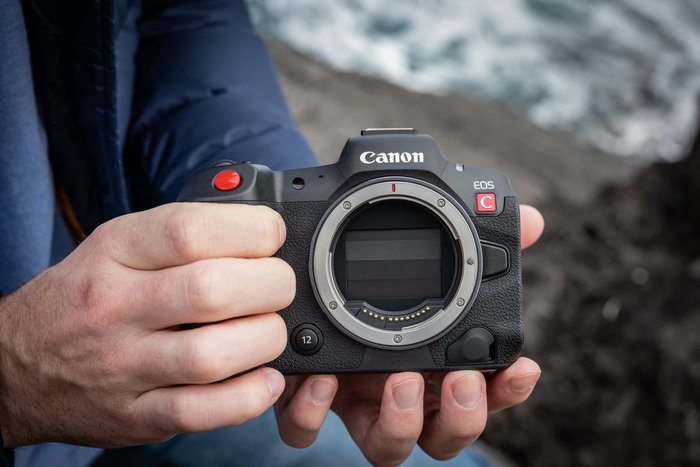 The hybrid EOS R5 C has the photo capabilities of the EOS R5 but adds a raft of pro features for filmmakers, including 8K long duration recording and a wide range of video formats. So, how do you decide which camera is best for you? We talk to an expert to find out more.

On paper, and even in the hand, the Canon EOS R5 C has a lot in common with the Canon EOS R5. The Cinema EOS hybrid camera shares many of the same controls, functions and specifications with its EOS R System stablemate, including a compact size, 8K video recording and 45MP stills. So, how do the two cameras differ?

Here, we examine some of the shared technology and key differences between the two cameras, with expert insight from Aron Randhawa, Product Specialist at Canon Europe.

Both the EOS R5 C and the EOS R5 use the RF lens mount, which features 12 communication pins – four more than the EF mount. This allows the camera and lens to share information more rapidly, unlocking improved autofocus, image stabilisation and optical performance, and providing practical benefits, such as enabling smoother aperture adjustments.

"Without doubt, the main advantage of the RF mount is the flexibility it gives to filmmakers," Aron explains. "While the EOS R5 C opens the door to cutting-edge RF lens designs, it's also fully compatible with Canon cine lenses, as well as EF mount photo lenses via the Canon Mount Adapter EF-EOS R. The EOS R5 C even supports anamorphic lenses, via a third-party mount adapter."

"Even though it's a full-frame camera, the EOS R5 C has Super 35 and Super 16 crops if you wish to use them in video mode," explains Aron. "So, if you are using a Super 35mm Cine Zoom, you can still do that."

The headline feature of the EOS R5 C is its ability to record full-frame 8K 12-bit video footage up to 30fps (or 60fps with an external power supply) internally in Cinema RAW Light. While the EOS R5 can also record 12-bit 8K RAW movies internally, it does not offer long duration recording.

The EOS R5 C introduces three new options for Cinema RAW Light: HQ (High Quality), ST (Standard) and LT (Light). "It's another example of how the EOS R5 C gives users much more choice," explains Aron. "With the EOS R5, you have either RAW or highly compressed file formats but not much in the way of a middle ground. When you're shooting in RAW on the EOS R5, you also have restrictions as to how long you can do it for. That's not the case with the EOS R5 C.

“You've got so many different options on the EOS R5 C,” Aron continues. “Not only do you get three versions of Cinema RAW Light, you have XF-AVC that works in the same way as it does with the EOS C70, with many different quality levels available – up to 810Mbps in ALL-I or Long GOP – as well as different resolutions. So, there's a very detailed scale of quality settings available in the camera."

One of the concessions of having a very high-performance video and photo system in one camera is that you have to switch between the two. It's pretty swift though. "You just have to wait a few seconds for the Canon EOS R5 C to go from one mode to the other," says Aron.

The EOS R5 C and the EOS R5 share the same 45MP full-frame CMOS sensor and stills specifications, so it's no surprise that when it comes to photography they produce identical end results, but the process of getting that final image differs slightly in each camera.

The EOS R5 comes with sensor-shift IS technology, also known as IBIS (In-body Image Stabilization), which moves the sensor to negate camera shake and delivers an industry-leading 8-stops of stability when paired with an RF lens. The EOS R5 C features the same 5-axis electronic IS system that's employed effectively in the EOS C70 and the original EOS R, which is often preferred in the professional cinema industry when working with manual lenses, gimbals and stabilisation equipment.

"If you are primarily looking for the very best photo performance, the EOS R5 has numerous benefits," explains Aron. "Not only does it have IBIS, it also has a more compact body that can slip into a smaller camera bag. It's more power efficient, and it has a single user interface, so you can instantly go from taking a photo to recording a video at the press of a button.

"Ultimately, though, the EOS R5 C and EOS R5 are capable of recording high-resolution 45MP images at up to 20fps, and they share the same professional photography functions, such as RAW and C-RAW image capture, the ability to save photos as 10-bit HEIFs, and an interval timer for time-lapse photography."

Although the Canon EOS R5 C and EOS R5 share a similar silhouette, the EOS R5 C features some key design differences. The most notable of these is that the body is slightly deeper, in order to accommodate a new thermal exhaust system. A cooling fan dissipates heat from the main body and makes it possible to maintain long duration 8K recording.

"The EOS R5 C is still incredibly light though," Aron says. "The body weighs approximately 30g more than the EOS R5, but when you hold the EOS R5 C it doesn't feel like a heavier camera. It also retains the same high-quality build and premium feel to the buttons and dials as the EOS R5, as well as the same level of dust and moisture resistance. So even though the EOS R5 C has a fan, that fan is separate from the electronic components inside the body," Aron explains.

True to its hybrid nature, the Canon EOS R5 C combines the accurate and reliable EOS iTR AF X technology that was first introduced in the EOS C70 with the innovative Dual Pixel CMOS AF II system from the EOS R5.

When the EOS R5 C is in video mode, EOS iTR AF X delivers continuous autofocus coverage over 80% of the sensor area. It also comes with the addition of Eye AF that was recently introduced in the Canon XF605. "This means that the EOS R5 C can track eyes, faces, and even the back of someone's head when they turn away from the camera," says Aron. "Unlike with the EOS R5, you also get professional options for fine-tuning the autofocus found in Cinema EOS, such as Face Only mode and accurately adjusting the speed or response of the AF.

"When you switch the EOS R5 C to photo mode, you still get the same innovative Dual Pixel CMOS AF II system that's found in the EOS R5, which covers 100% of the sensor area and adds the highly regarded Animal Tracking."

Both the EOS R5 C and the EOS R5 are compatible with the Canon RF 5.2mm F2.8L Dual Fisheye lens for creating high quality and immersive three-dimensional 180° VR content.

Thanks to their high-resolution full-frame sensors, both the EOS R5 C and the EOS R5 are able to take advantage of Canon's EOS VR SYSTEM. When combined with the RF 5.2mm F2.8L Dual Fisheye lens, EOS VR Utility and the EOS VR Plugin for Adobe Premiere Pro, either camera makes it easy for content creators to produce stereoscopic 180° VR.

"The key thing is that the sensors in these cameras are 8K, which gives the resolution that's required for very high-quality, high-fidelity VR experiences that are really immersive," enthuses Aron. "Compared with the EOS R5 however, the EOS R5 C is better equipped for the job. Not only does it offer long form recording, but it can also deliver 8K at 60p (when used with an external power supply), which is a significant improvement that gives the content a more natural, fluid type of motion."

"If you are a photo-focused person or don't require the highest quality video format, the EOS R5 could be considered a better solution," says Aron. "It still gives you the ability to record 4K video at up to 30fps for long durations and can even output 8K ProRes RAW via HDMI."

Though the EOS R5 C and the EOS R5 share a similar design and identical video and photo resolutions, they are very different offerings. "There are reasons why you might choose the more photography-focused EOS R5 instead of the EOS R5 C," Aron suggests. "Compared to the EOS R5 C, the EOS R5 is more compact, with a longer battery life and the benefit of IBIS for photos."

"...But the EOS R5 C is a hybrid. It doesn't compromise when it comes to image quality, whether you're shooting video or stills, and it's an incredibly versatile camera for solo shooters."