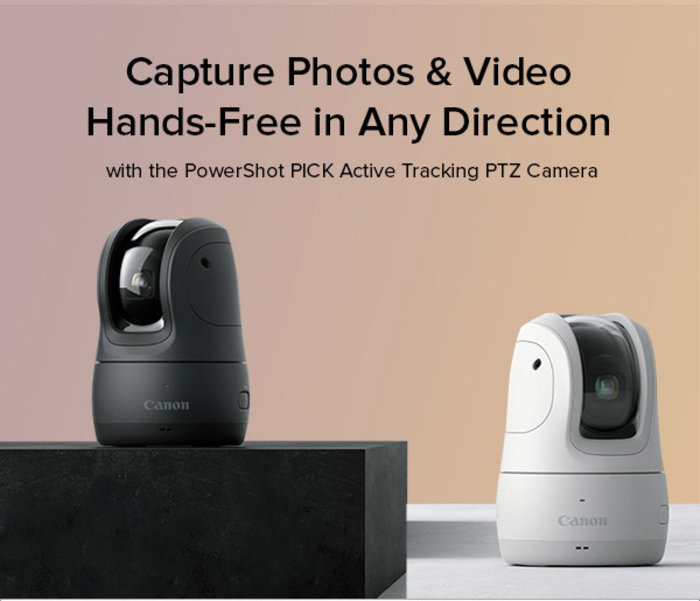 Introducing your own personal photographer

When you want to capture life's precious moments, but also want to be in them, the PowerShot PICK is ideal - capturing natural expressions following the action and automatically framing people intelligently and creatively. Trust the PowerShot PICK to capture the people and moments in your life, automatically composing photos and video with its pan and tilt lens, while you carry on being in the moment.

Everyone in the shot - including you

Enjoy your time with your family and create a lot of images using the PowerShot PICK, all automatically, leaving you to enjoy the moment.

The PowerShot PICK can go anywhere, thanks to USB-C charging and built-in Wi-Fi, which links to your smart device. Want more control? Just ask - it's voice activated too. Just say, “Hello Pick, take a picture”, and it's done, hands free! Four voice commands* cover useful functions like taking a video and finding other people to capture.

* Voice activation not available in all languages. 4 voice commands are included with specific wording.

Smiles. Laughs. All your loved ones' expressions.

The best photos aren't always the posed smiles, although they're always popular. The PowerShot PICK captures a huge range of looks and precious reactions that you might not capture.

Use it as a Wireless Webcam

*Only available for Windows 10 PCs

Using a unique algorithm that was developed over the years by Canon, the PowerShot PICK will automatically search for faces of people nearby once it is switched on, adjusting the composition of the shot and shoot based on facial information with its pan, tilt and zoom (PTZ) mechanism.

The intelligent technology behind the PowerShot PICK means that it can automatically shoot various scenes where people are smiling, with a variation of compositions. Subsequently, recommended scenes will be filtered from the many images taken, making it even easier to select and decide which images you would like to keep and share, saving time and effort.

The PowerShot PICK also has a wide-angle coverage of 19mm (in 35mm format equivalent), allowing a large group of people to be included within the scene and it works well in small enclosed areas. This allows users to place the camera at an easy angle to allow continuous footage shooting without having to worry about adjusting the camera. Up to 5 hours of video recording through the camera's built-in battery allows the camera to be portable and can be used anywhere. Also, it can be charged via its USB-C port.

Tracking and Image Stabilization (IS)

Using Canon's Nano USM technology, the PowerShot PICK is capable of silent and high-speed tracking, automatically tracking the subject so that the face stays within the angle of view even when the subject moves. The camera effectively suppresses blur by mechanically controlling the rotation angle of the lens barrel, ensuring the user will be able to get the clearest shots available without having to be physically present to ensure that the camera is focusing on the right targets, saving an incredible amount of time and providing tremendous efficiency when it comes to capturing your most memorable moments.

Manual capture of photos and videos is possible by using your connected smartphone or tablet as a remote to control the movement and angle of view of the PowerShot PICK.

Images shot by the PowerShot PICK can be previewed on the app, which will also highlight the best recommendation from the gallery. Save your favorite shots to your smart device, or generate a highlight video* within the app.

*Only available on iOS